Just one week after Celcom launched the Ajoke service, I have been hearing a lot of GOOD NEWS around…. As an ANTI-SPAMMER which Celcom says to be, seems to be named as spammer by one, opps….not one but few of their customers.

“Since a few days ago I have been receiving a message from Celcom about a service AJoke. I attach the message that I receive everyday from Celcom. The joke is FREE but if I want to read it again I will have to dial *008 and be charged 20 cents per call. I think most Celcom subscribers do receive such messages and don’t be so silly to be trap into this scam. You can get FREE jokes anytime and anywhere FOC.

If I want to stop receiving the joke I must dial 25653 which I don’t know whats the charge is. Now, why is a reputable company like Celcom is making easy money from silly ideas such as a joke which doesn’t bring about any positive effect at all. 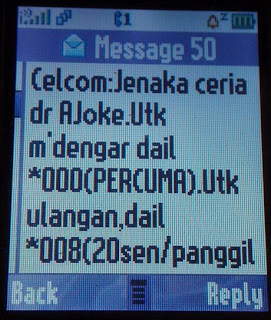 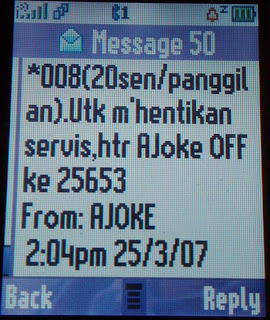 You may also want to read here.

Previous article
Bluetooth 2.1 announced
Next article
DiGi Fu-YoH!!(Full News)
Kugan
Kugan is the co-founder of MalaysianWireless. He has been observing the mobile industry since 2003. Connect with him on Twitter: @scamboy