THE disposal of Time dotCom Bhd is the preferred solution to solve UEM Group’s woes in Time Engineering Bhd, says a top official.

“To us, the preferred solution is for Time Engineering to divest its investment in Time dotCom. This is the preferred option, but how to do it is another issue,” UEM Group managing director and chief executive officer Datuk Ahmad Pardas Senin told reporters recently. 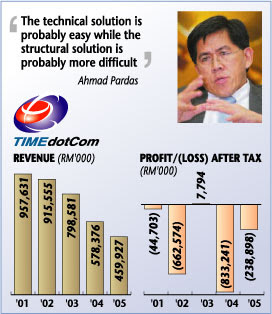 Ahmad Pardas said when taken into context of the UEM Group, Time Engineering contributes only a very small portion financially.

“Nevertheless, we are very concerned with the development in this particular sector but the solution is not going to be easy.

He said UEM is only exposed to the financial woes of Time dotCom through its parent Time Engineering.

Previous article
Maxis IP VPN for enterprise business
Next article
Malaysia part of the new fiber optic cable between Southeast Asia and U.S
Kugan
Kugan is the co-founder of MalaysianWireless. He has been observing the mobile industry since 2003. Connect with him on Twitter: @scamboy