IF preparedness is a reliable predictor of success, then Green Packet Bhd looks set to be a leading broadband player in Malaysia. Among the four WiMAX licensees, the Mesdaq company has arguably the most solid base for the rollout of wireless broadband services.

The Malaysian Communications and Multimedia Commission last month named the successful applicants for the 2.3GHz broadband wireless access spectrum tender exercise, but Green Packet had begun gearing up for the new venture over a year before that. 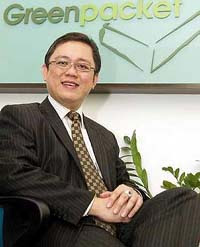 Says chief executive officer Puan Chan Cheong, “I would say we’re ahead of the other licensees.”

Green Packet believes it already has the technology, skills and cash pile – Puan calls it “our little war chest” – to be a competitive service provider in the broadband market. The plan is for Packet One Networks (M) Sdn Bhd, the subsidiary that was awarded the WiMAX licence, to begin offering its services by the end of the year.

The adoption of WiMAX is at an early stage and there is still much work to be done in other areas (such as hardware and content development), but Puan sees the technology as a force that will lower the odds against recent entrants to the telecommunications sector.

This is an indication of Green Packet’s ambition to evolve from a developer of networking solutions into a full-fledged telecommunications company (telco).

He points out that there is no way the new players can wire every home as the incumbent telcos have already done. There have to take the wireless route and WiMAX offers that opportunity.

In a news release in response to the award of the WiMAX licences, Green Packet explains, “WiMAX, which stands for World Interoperability for Microwave Access, is a wireless digital communications system that is intended for wireless broadband access.

“In areas without pre-existing physical cable or telephone networks, WiMAX can be a viable alternative for broadband access that has been economically unavailable.”

Headed by chairman Datuk Abdul Ghani Abdullah, Asiaspace is described on its website as “an infrastructure company for broadcasting and telecommunication network” and is best known as a builder of telecommunications towers for cellular operators.

Green Packet’s desire to secure in a WiMAX licence became public knowledge on July 18 last year, when it announced its proposed purchase of a 55% stake in Packet One, then known as MIB Comm Sdn Bhd, which had submitted a bid for the 2.3GHz spectrum.

Puan says MIB Comm was chosen as an acquisition target because it has a Network Facilities Provider licence, a prerequisite for application for the WiMAX spectrum.

“MIB Comm is a very clean vehicle. Starting from scratch will take us too long,” he adds. Although there is no shareholder agreement to provide for Green Packet increasing its shareholding in the subsidiary, Puan does not rule out that possibility.

In fact, Green Packet had been getting ready for the new business well before it had signed the MIB Comm deal. The first step was to raise funds. In December 2005, it said it planned a private placement of up to 10% of its paid-up share capital. This was completed on June 30 last year.

Capitalising on its status as favoured stock, the company undertook a second private placement, which was completed last December. The gross proceeds from both exercises amounted to RM272.5mil. It was clear that the management had decided to move in a new direction, one that requires substantial capital expenditure. 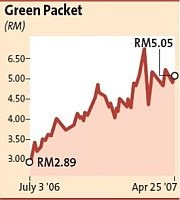 Says Puan: “Our existing core pillar is solutions. That will continue with its high-growth pattern because of our industry and regional focus. Now we are building a new pillar.

“A lot of the products that we have developed are very good for wireless broadband. And we have been given the opportunity to hold all the licences. This allows us to use our technology to contribute to the national broadband policy. We feel the broadband market is underserved.”

Pivotal in Green Packet’s broadband strategy is the company’s SONmetro range of products, which enable the provision of wireless broadband connectivity “at GSM-type coverage with DSL/cable data speeds and high-speed mobility at a substantially low-cost”.

By building a network that combines the capabilities of SONmetro and WiMAX, Green Packet believes it can offer wireless broadband services at reasonable rates.

The company we will be spending RM500mil on this approach for the next three years, mostly for infrastructure and backend systems, such as for the billing of customers.

It will take time

The transformation at Green Packet will be major. For one thing, it will take on a business-to-consumer dimension, which requires new ways to gain and retain customers. “To change from our largely B2B (business-to-business) model, we are mindful of the need to get a new team and new skills,” says Puan.

A key move, according to observers, was the appointment of Michael Lai as head of Green Packet International Sdn Bhd.

As the ex-CEO of TM Net Sdn Bhd, Lai is widely credited for the big jump in the number of broadband Internet subscribers in Malaysia. Analyst agree that his marketing expertise may well be instrumental when Green Packet begins establishing a subscriber base.

Puan says the aim is to first target enterprises rather than homes and individuals. He explains, “The ARPU average revenue per user) is higher, and the service providers and enterprises can better absorb the prices of the CPE (customer premise equipment, that is, the devices used by the customers to gain access to the wireless networks).

He acknowledges that the WiMAX venture is probably riskier than anything else Green Packet has previously done, but argues that the prospects look bright.

“In any business anywhere, the No. 1 and No. 2, and maybe even the No. 3, are likely to be profitable. We believe that Green Packet has a very good chance to be No.2 in the Malaysian broadband market. We believe people are dying for alternatives. We still consider ourselves a start-up and we’re very hungry,” he says.

However, he cautions that the pay-offs will not be immediate. Like any new technology, he points out, WiMAX allows people to dream of possibilities. “But we have to get back to earth. It takes time for the whole ecosystem to mature,” he adds.

He cites the example of 3G services, whose introduction in recent years had been preceded by massive hype. In parts of Europe, for example, 3G licences had been given out about a decade ago, but customers have yet to fully experience the services promised.

The cost of the CPE, which is about US$200 to US$300, is an obstacle. To Puan, the ideal price point is US$50. To get to that, there has to be a huge increase in sales volume. That will not happen until the manufacturers begin churning out a lot more WiMAX-compatible hardware, such as notebook computers and mobiles devices.

On Green Packet’s ambition to move up the telco industry ladder, Puan says: “We are building, if you like, a Nokia or a Cisco with products such as SONaccess, SONbuddy and SONmetro. We are using a lot of our technology to build another vehicle. It’s similar to the Vodafone model.”

“We plan to do this not only in Malaysia, but also in other countries. In Malaysia, we’ve been lucky to get spectrum and licences. But this will not be the case in the other countries because of the different regulatory environments. So we will partner with others.

“We bring the technology and investments, and piggyback on the local partners’ licences. This way, we can create a recurring revenue division.”-TheStar

Previous article
Malaysia part of the new fiber optic cable between Southeast Asia and U.S
Next article
Planning to buy a new phone?
Kugan
Kugan is the co-founder of MalaysianWireless. He has been observing the mobile industry since 2003. Connect with him on Twitter: @scamboy