RELENTLESS best describes the speculative hype over DiGi.Com Bhd‘s rumoured tie-up with Time dotCom Bhd. Yet, both companies have consistently denied such a possibility when queried by Bursa Malaysia.

It appears now that there may be another tie-up being thrashed out by DiGi, but only this time it involves Mesdaq favourite Green Packet Bhd. A source says DiGi is in talks to take over Green Packet in an exercise that may involve share swaps. The planned merger will result in existing Green Packet shareholders owning an interest in an enlarged entity instead.

It is understood that talks are ongoing and the issue of pricing is being thrashed out. As at end-March this year, Green Packet’s net asset per share stood at some 96 sen. The counter finished on Thursday at RM4.20 while DiGi ended the same day at RM20.40.

Green Packet has proposed a transfer to the main board of Bursa Malaysia upon the completion of a proposed bonus issue and share consolidation, which got the nod from shareholders at its recent EGM.

An analyst from a local brokerage says, “For tech companies such as Green Packet, the net asset per share is of little significance as the share price actually reflects the potential in the company’s business. So the valuation will have to be based on that premise.”

“There were talks between DiGi and Time dotCom, but that was a cash deal. This one (DiGi and Green Packet) may involve a share swap which DiGi may more inclined towards,” says the source.

Company officials have stated that DiGi is looking to spend in the region of RM900mil this year to upgrade its network.

The impetus for DiGi to stage such a corporate manoeuvre is quite clear, in fact it has been chronicled umpteen times and yet the company has remained resilient throughout. To recap, it was not awarded a 3G license and was unable to secure a WiMax license, which would have enabled it to roll out broadband initiatives. Yet, the need to move into broadband is compelling for the telco as it continues to drive its business and expand its revenue stream.

On the other hand, Green Packet was one of the lucky four who clinched a WiMax licence earlier this year. The company via its unit Packet One International Sdn Bhd bought 55% equity in MIB Comm Sdn Bhd (a company awarded a WiMax licence recently) late last year for about RM6mil. With that, Green Packet’s appeal to DiGi is easy to appreciate; it is eyeing the WiMax licence.

DiGi’s chief executive officer Morten Lundal dropped some vague hints recently at the company’s annual general meeting: “We are not against any acquisitions, but we are not on an acquisition hunt either. We’re looking at a long-term situation and we would like to have a broadband platform. We’ll seek spectrums and we’ll look at partnerships. When it arrives in a positive way for us, we’ll go further.”

Green Packet, presently the largest company by market capitalisation on the Mesdaq market, has already laid the groundwork to roll out its WiMax initiative, SONmetro solutions, which is both WiMax and Wi-Fi compatible, by year-end. 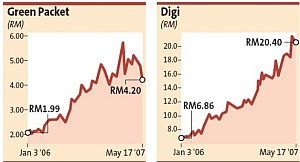 The company has a presence in China, the Middle East and North Africa among others and has an associate stake in GMO Ltd a company listed on the London Stock Exchange’s Alternative Investment Market. For its first financial quarter ended March this year, Green Packet posted a net profit of RM10mil on the back of RM31.4mil in sales, which is a gain of about 26% and 173% respectively from a year ago.-JOSE BARROCK,TheStar

Previous article
Blogging applies under the Malaysian Law
Next article
iPhone gets green light from FCC in the US
Kugan
Kugan is the co-founder of MalaysianWireless. He has been observing the mobile industry since 2003. Connect with him on Twitter: @scamboy