DiGi on possible tie-up with a Broadband provider

It is speculated that DiGi might partner or take over its rival to expand its broadband services.

“We are not against acquisitions but are not on the hunt either” chief executive officer Morten Lundal said after the company’s AGM on May 8, 2007 at Mandarin Oriental Kuala Lumpur. 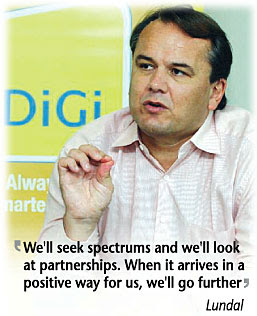 Time dotCom Bhd and Green Packet Bhd was said to be the “possible” companies to tie-up or might be take over by DiGi.

“We are open to any potential collaboration and partnership as long as we are able to leverage on each other’s strength” Green Packet’s chief executive officer Puan Chan Cheong told reporters after the company’s AGM in Kuala Lumpur on May 9.

Puan decline to speculate on the possible merger with DiGi.

Time dotCom was the second most active counter yesterday(closed at RM0.86) after being speculated on a possible tie-up with DiGi.

DiGi is currently in talks with several “unidentified parties” on the matter.

Previous article
Telekom Malaysia Posts Higher Q1 Profit
Next article
WiMAX Asia 2007
Kugan
Kugan is the co-founder of MalaysianWireless. He has been observing the mobile industry since 2003. Connect with him on Twitter: @scamboy