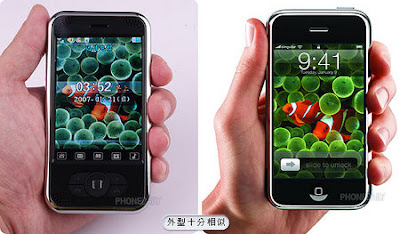 The cloner has named this “iPhone” as P168. Can you differentiate which one is the real iPhone from the picture above…………………..? Its the one on the right…..

According to Gizmodo, the P168 has six speakers for “surround sound”, 3.5-inch touchscreen, face keys, 1.3-megapixel camera (even though it says 2.0-megapixels on the back) and a microSD slot.

Read more at Gizmodo and Newlaunches.

Here is the video that CNBC says iPhone will be out on June 20th.