Will Malaysians be free from SMS spamming? 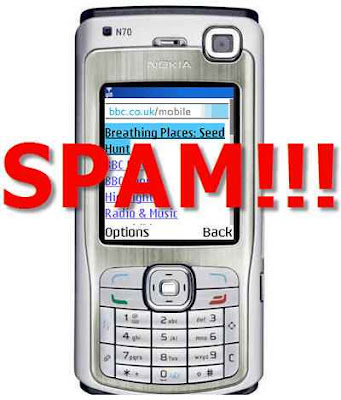 Since last year, there are hundreds of complaints out there from users who received SMSes or charged for SMS that they never requested, probably there are some thousand of users out there that choose to ignore these SMSes and was not aware that they were charged for it.

How long will these carry on? Is MCMC just watching or benefiting from these issues? or they are not capable of handling it? Whatever the reasons are, hundreds of Malaysians out there still get spammed today.

Maxis in a recent press release claims that they have successfully installed Anti-spam and Anti spoofing solution operational since July 2007.Read here.

According to a recent article from Jeff Ooi, Mr Lim CH, a Malaysian and a Maxis Postpaid user, has been charged for receiving spam, 24 times, from a company called Matrix Internet & Wireless Sdn Bhd.The itemised bill dated September 07, 2007.

If Maxis claims its Anti-Spam and Anti Spoofing has been installed since July 2007, and managed to stop over 1.2 million intrusive SMS from reaching customers, then I think the “solution” is not good enough!!! 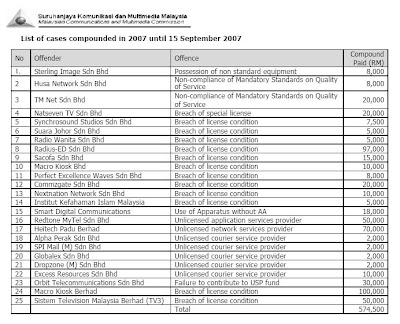 List of cases compounded by MCMC this year until 15 September 2007(click image)
So compound is effective? Which is aimed to stop content providers from doing their illegal activities. It is believed that some of these companies are repeated offenders, up to 4 times. If its true, then it proofs that fines or compound has failed to meet its goal.

Why MCMC is holding itself from taking serious action against content providers with repeated offense and Telcos in the country? What or who does it fear? Why does these repeated offenders still doing business in Malaysia?

By the end of this month, Maxis and Celcom will soon implement online billing for its prepaid customers. Will these help reduce spamming and spoofing? Postpaid customers with bills are still being scammed.

MCMC has got a good track record in the country. Last heard, the interference between the 3.5Ghz frequency and Measat 3 is still not solved. The question here is, why was the license issued at first place?? Internet users has raised a lot of issues regarding quality of internet service in the country for years, yet it is still not solved. Since there are still no proper and strict guideline on internet service, we still don’t get to achieve the internet speed that was promised.Thanks to best effort, and MCMC.

In Malaysia, license are worth up to millions.

I believe, if we have a good Commission and a good Ministry, we are guaranteed to enjoy world class telecommunication service. In the US, license are worth billions, and they can handle it. We can’t even solve SMS spamming and spoofing.-Telco Talk Malaysia

Previous article
Maxis New Wireless Broadband packages
Next article
iPod Classic for sale
Kugan
Kugan is the co-founder of MalaysianWireless. He has been observing the mobile industry since 2003. Connect with him on Twitter: @scamboy