DiGi has access to 3G but it can’t use it, for now 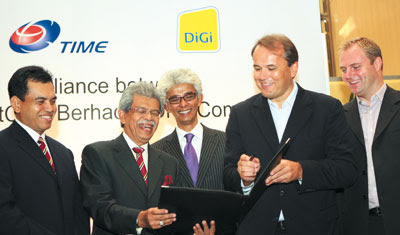 Gone are the days where DiGi did not had a 3G license when its competitors where doing nothing much with it. Now, DiGi has a 3G license, yet it can’t use it until it receive an approval from MCMC and KTAK.

According to the authorities, Time dotCom will have to write in seeking permission to transfer the use of its 3G spectrum to DiGi.

Last time, when DiGi failed to get the license from the Government, losing to loss making company, Time dotCom, and new player MiTV(now U Mobile), the MCMC and KTAK where questioned about it since DiGi was excellent in everything except it was not a Malaysian company although it is listed here. Now that DiGi could be considered a partly owned Malaysian company(aka Government company, indirectly via Khazanah Nasional for at least 10%) what excuse is MCMC and KTAK going to give now?

Time dotCom earned 27.5 million of new DiGi shares with a value of RM654 million for doing nothing!! It later purchased another 50.25 million shares of DiGi for a total of RM1.08 billion. At the end of the deal, Time dotCom had a 10 per cent stake in DiGi that is worth for 1.74 billion.

The rest of the shares(around 3%) were bought over by some 40 local institutional funds via a placement exercise by CIMB and JPMorgan for a total of RM564 million.

Based on the current market price, a 12% stake in DiGi is said to be worth for some RM2.1 billion.

Although the deal allows DiGi to use the 3G license until 2018, the deal can still be renewed or DiGi could opt for something like WiMAX or other upcoming technologies to stay ahead its competitors.

With less than 1 million 3G users in the Malaysian market, DiGi still has room to grow. As U Mobile comes into the picture by early next year along with Mobile Number Portability(MNP), Malaysians will benefit the most from these.

According to DiGi, it will spend additional RM600mil to RM800mil over the next three years for 3G.

Previous article
REDtone now an MVNO
Next article
3.3 billion humans on Earth uses a mobile phone, that’s half of the global population
Kugan
Kugan is the co-founder of MalaysianWireless. He has been observing the mobile industry since 2003. Connect with him on Twitter: @scamboy