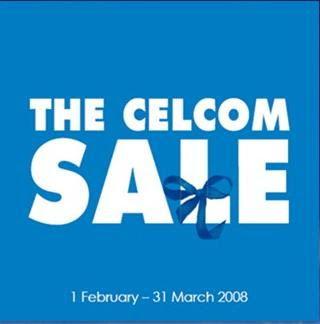 As most of you may have known, Celcom has launch its Celcom Sale campaign from 1 Februrary to 31 March 2008.

According to Dictionary.com, SALE is defined by “a special disposal of goods, as at reduced prices”, “the act of selling”, “an auction”…..

Celcom Sale campaign is offering mobile phones, modem, and other things that the product does not fall under Celcom, directly. The only Celcom product going on a so called “SALE” is a 50% discounts on selected Channel X contents, 3000 sms for new Xpax customers and the Home, Hop, Away package (Celcom Broadband+Streamyx at RM108 a month).

The question here is, Celcom has a number of product and services. Does 3-4 Celcom product & services offered as a promotion can be considered as a BIG CELCOM SALE???

In my opinion, when Celcom says that they are going on sale, I believe that there should be a discount/offer on all their product and service like their postpaid plan, prepaid starter packs, cheaper broadband subscription and so on…. Selling mobile phones from other brands and launching the new Executive Plan does not mean that it could become a “Celcom Sale campaign”.

What do you guys think? Can this be called a Celcom Sale campaign(where according to Celcom, all Celcom’s product and services goes on sale)?

Note: I am a DiGi and a Celcom customer. I did not write this article on a personal reason. This article is purely on an opinion basis.

Previous article
Complaint-Make yourself heard!!!
Next article
New KTAK Minister
Kugan
Kugan is the co-founder of MalaysianWireless. He has been observing the mobile industry since 2003. Connect with him on Twitter: @scamboy