Have you heard of the new DiGi Prepaid plan? If not read this Mobile World article. 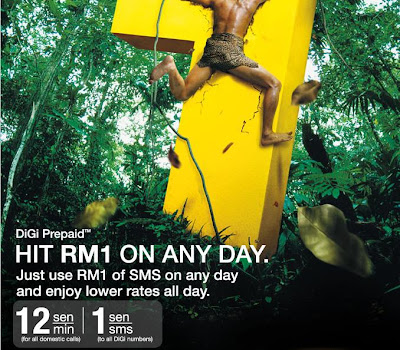 Basically, the new plan allow calls for as low as 12sen/min to all domestic numbers and 1sen/sms if you use RM1 worth of SMS, all these within the day. Is DiGi trying to encourage its prepaid users to send more SMS? Why not RM1 worth of usage including voice? Too bad that I was not at this press conference to get clarification on this.

On top of the lower call rate, DiGi also introduced a maximum daily cap of RM5 for mobile data on its EDGE network. Celcom also has a similar plan but prepaid users need to subscribe to enjoy unlimited data at RM6 per day. Thanks DiGi & Celcom, this is great and will allow those majority prepaid mobile users out there to surf on the phone without worries on high data charges anymore. I am still waiting for Maxis to take this important step since mobile data will play a major role in the future.

Note that DiGi Prepaid I Like plan is no longer available, this plan was launched in September 2008 last year, I personally believe that the plan did not perform well.

As you can see from the Mobile World article(link above), DiGi also launched a new supplementary plan called DG Family.

Personally, I think this is one of the most expensive supplementary plans out there since prepaid users on this plan pays a “commitment fee” of RM15 but there are no difference on call rate which is the normal prepaid rate of 36sen/min whereas the older supplementary line is cheaper at RM10 a month and lower call rate between 15sen-30sen per minute although you don’t get any free call/sms between principle & supplementary lines.

Plus EACH DiGi Family Prepaid is charged at RM15 per month and RM30 for each DG Family Postpaid. To make things easier, my opinion on these plans is that it is complicated and expensive.

I recommend the Celcom 1+5 supplementary plan which is cheaper at RM5 per month with free calls, SMS, MMS, video calls between principle and supplementary lines.

I wonder why DiGi is offering more complicated prepaid and postpaid plans today when it used to offer ONE PLAN for everyone. Things has changed now whereas Celcom offers simple to understand postpaid plans whereas DiGi & Maxis has more “complicated” plans.

A few years back, it was the other way round with Celcom offering those complicated “minutes plan“.

Previous article
Maxis iPhone 3GS Plans are out!
Next article
Maxis Broadband PC Fair Promotion
Kugan
Kugan is the co-founder of MalaysianWireless. He has been observing the mobile industry since 2003. Connect with him on Twitter: @scamboy