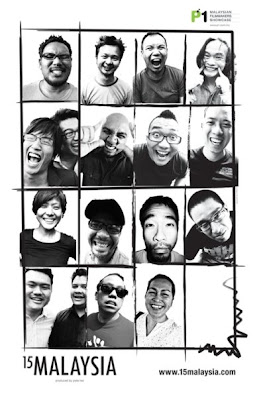 I let the FAQ do the talking:

15Malaysia is a short films project. It consists of 15 short films about Malaysia directed by some of the best young filmmakers in our country. Each film lasts between 3 to 7 minutes.

WHAT ARE THE FILMS ABOUT?

All our films have socio-political subject matters. These vary from corruption, race relations, inflation, Islamic banking, social apathy, ethical commerce, pedophilia, government health warnings and so on. Some are funny, other serious – all try to deal with aspects of Malaysian life. Each filmmaker was responsible for choosing his or her own subject matter.

WHO ARE IN THE FILMS?

Our cast is a mix of actors, musicians and politicians such as Khairy Jamaluddin, Nik Aziz, Liow Tiong Lai, Tian Chua and Zaid Ibrahim. All were invited based on their willingness to participate and suitability for the role that they played. There is also a dog amongst our cast. And no, we don’t mean Paris Hilton…

Get to more on 15 Malaysia here.

15 videos directed by 15 directors will be released batch-by-batch on television everyday until Malaysia Independence Day. However there will be a special screening later today for media and invited guest to watch all the 15 episodes of 15 Malaysia.

Below is one of the trailer that I personally like called ‘Healthy Paranoia’ by Khairil M Bahar.

P.s: Can’t wait to watch all the episodes later!

Previous article
DiGi + Music
Next article
DiGi is Testing 3G Internally
Kugan
Kugan is the co-founder of MalaysianWireless. He has been observing the mobile industry since 2003. Connect with him on Twitter: @scamboy