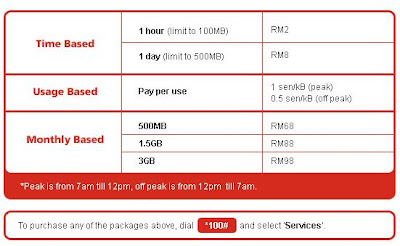 Some smart people in Maxis has made changes to the new Hotlink Data plans, effective late August 2009.

As you can see from the screenshot above, Maxis has brought down 5 hotlink data plans to only 2. According to a source, Maxis has already started their marketing activities for the 5 new data plans when introduced. I guess Hotlink users will be confused to see 3 of the data plans missing now.

In comparison to Celcom’s Broadband Daily for unlimited use at RM6, Hotlink’s new Daily Broadband plan is still more expensive at RM8, limited to 500MB usage. While Weekly Broadband is priced higher at RM25 for 2GB versus Celcom weekly data plan at RM20 for 5GB.

The only advantage of Hotlink’s data plan is that it is riding on Maxis HSDPA network with maximum speed up to 3.6Mbps-7.2Mbps while Celcom’s daily & weekly data plan is limited to 3G speed.

Previous article
Telekom Malaysia Alternative Contact Number
Next article
iTalk IDD Promotion
Kugan
Kugan is the co-founder of MalaysianWireless. He has been observing the mobile industry since 2003. Connect with him on Twitter: @scamboy