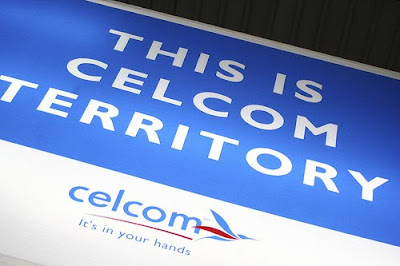 If you were in one of the “Ini adalah Wilayah Celcom“, you might had trouble in making and receiving calls using Celcom.

Muktamad! Celcom’s network went down last Thursday(24 September, 09) started about 9.30am leaving more than a million Celcom users in the dark for more than 10 hours. Please read official news here.

Although Celcom claims the problem has been resolved, yet a number of users has been complaining on the 25 September 09 that they were some difficulties in making and receiving call, plus delayed SMS & slow mobile broadband.

When Celcom merged with TM Touch, the cellular unit of Telekom Malaysia in the year 2003, it lost a number of mobile users through the years. Back then Celcom was the leading telco in the country, because it had the right branding and network quality was great.

The new Celcom that we see today is different. They are at least 5 operators sharing the traffic on Celcom’s GSM network(U Mobile, XOX, Tune Talk, Merchantrade, REDtone) making it the largest GSM network in the country with one of the highest traffic. The question here is, can Celcom handle these traffic? Apparently, we have seen the results for the past two days. Are they planning for more MVNOs?

Their 3G network currently has the highest traffic in the country with over 420,000 mobile broadband users and these numbers does not include normal data usage on the phone and other sources (such as the TNB Meter readers, ATMs..etc).

When a user has problems with their mobile service, the 1st thing they would do is to contact the customer service. When Celcom’s network went down last Thursday, the second thing went down was their Helpline(1111), and at the same time they were no immediate updates on Celcom’s website or their accounts on social networking until a couple hours later but it was too late.

It is important to use all sort of communications to let their own customers know about the network breakdown before even the customers find out, but Celcom choose to leave them in the dark. Even yesterday, no sms or apologies where sent out to customers. Is this the NUMBER 1 experience that Celcom is trying to give?

What Celcom should have done:

Before I forgot, in 2007 here’s what Celcom claimed- Number 1

The last time I reported Celcom had network problem was in November last year.