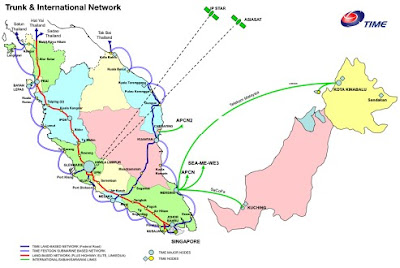 At the point of writing, Time dotCom (Tdc) only has about 3.5% equity interest in DiGi or about 27.5 million shares. It earlier had 7.1% shares in DiGi before it sold 3.6% of those shares(via Hakikat Pasti Sdn Bhd) through a private placement for $171.7 million or 604.95 million ringgit last week.

In my personal opinion, I think they are probably making a mistake here. Why would they give up shares that promises good dividend over their debt? DiGi’s dividend policy is to pay out at least 50% of its net profit, which is good enough. While TdC could pay off their debt (RM552.7 million in bank borrowings), they can never afford to buy back these shares, which might have more value after DiGi launch 3G for voice.

In January, TdC disposed some 2.9% shares in DiGi through a book-building exercise for RM463.5 million cash, also to pay debt (reducing their stake to 7.1%). Norway’s Telenor still owns 49% of DiGi.

Time dotCom, a fixed-line services provider, said its wholly owned Hakikat Pasti sold the shares at 21.80 ringgit a share via a private placement.

Time said its shareholding in DiGi has been reduced to 3.5 percent from 7.1 percent following the share sale.

Previous article
Telephone Numbers on illegal Advertisements face Termination
Next article
Happy’s response to Tune Talk
Kugan
Kugan is the co-founder of MalaysianWireless. He has been observing the mobile industry since 2003. Connect with him on Twitter: @scamboy