I was facing problem this morning about 3am when my modem started disconnecting and speed was crawling less than 500Kbps. About few hours later, I believe thousands of P1 users was having problem to connect to the network, probably a nationwide blackout.

At the point of writing, the problem has been resolved(about 5pm) according to P1’s official twitter channel.

It may took over 12 hours to resolve but the positive part of this is that P1’s support team did not disappear. I am not sure about their Hotline but they were active on Facebook and Twitter, responding to a number of users. Thumbs up! 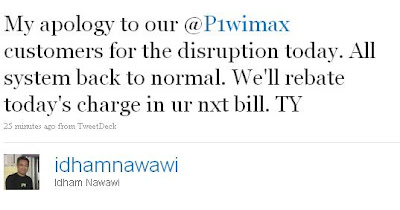 Also the latest tweet form P1’s Chief Operating Officer Idham Nawawi indicated that there will be a rebate on customer’s bill next month. I have no details regarding the rebate but I am sure it will be a fair one. At least, this is how it should have been years ago and MCMC should be the one enforcing this. But P1 is doing this without any directive from MCMC. Another thumbs UP!

Is anyone from Celcom reading this?

The P1 network team is still investigating the network issue, so there are no official report at the time of writing. Hopefully this will be the last one and we will not see anymore outage on the P1 network.

If there are any official response from P1, it will be on the Mobile World website.

Previous article
Adv: Be at Go Mobile 2009 next week!
Next article
DiGi Turbo 3G to launch on 22 October 09
Kugan
Kugan is the co-founder of MalaysianWireless. He has been observing the mobile industry since 2003. Connect with him on Twitter: @scamboy