What I think of the Nexus One: It is an excellent device and I hope it will give Apple a run for their money. This is currently the most wanted device in my list! 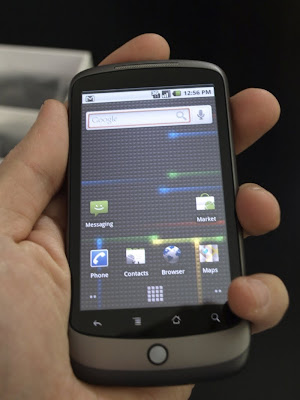 Boston, MA – January 6, 2010 – Yesterday Google launched the Nexus One, an HTC-built phone using Google’s own mobile software platform, Android. The high-end handset, described by Google as a ‘Super Phone’, will compete directly with other high-end Android phones. However, the key aspect of this launch was not the device itself but Google’s entry as an online retailer of phones. The Nexus One may not be a game-changer in terms of technology or pricing, but it does reinforce Google’s ambition to become the first managed device platform (MDP) vendor.

The Nexus One moves Google towards becoming an MDP vendor
The importance of the Nexus One is not in the hardware or pricing, but in Google’s control of the complete end-to-end user experience of the handset, from procurement to the delivery of web services to the device. We believe that MDPs will define the new high end of devices over the next five years. As smartphones are pushed further into the mass market, the important distinction of a phone will not be smart or not smart but managed or unmanaged.

This new category of managed devices will be delivered by a handful of vendors that have the resources to manage end-to-end delivery of web services to consumer devices. Google will be one of these vendors.

Google’s investment in the Nexus One is bad news for other Android OEMs
The Nexus One has modestly differentiating hardware. It is certainly no slouch in the specification department, but aside from the AMOLED display it does not set itself apart from, for example, the Motorola Droid or the HTC HD2. Its other differentiator, aside from the display, will be its use of the latest build of Android (Version 2.1, previously codenamed ‘Flan’), of which the most significant feature is the use of voice input for every text field, so users can speak entire emails, tweets or requests for navigation routes.

Its use of the latest Android build creates tension with other Android OEMs, which have now committed to device launches with older software versions that could be perceived by consumers to be inferior.

Retail is a new direction for Google
Google acknowledged that the move into online retailing represented a great leap, though it hopes to take this in ‘baby steps’. The Nexus One is the first of a number of handsets it hopes to sell through its online store. Other online companies have come to grief in the fulfilment maelstrom, a domain in which Google has almost no experience or assets at all. Even Google’s retail payments service, Google Checkout, has been relatively unsuccessful. Google aims to improve the store over time and serve new countries when it can roll out a robust offering. If it is successful then other online retailers such as Amazon will have good reason to be nervous.

For operators, success for Google would be a much more mixed blessing/curse; managing handset logistics and holding expensive stock in channels is a complex and troublesome process. On the other hand, ‘exclusive’ handset deals are one of the few ways in which operators can seek to distinguish between their standards-based offerings.

Nexus One take-up in the US will be limited by carrier incompatibilities
Today the Nexus One can be purchased for either $529.99 unlocked or $179.99 with a two-year contract on T-Mobile in the US. It will also be available through Verizon Wireless in the US and Vodafone in the UK in due course.

At present, the Nexus One is all but exclusive to T-Mobile in the US. Although available unlocked, radio incompatibility means that it will not operate on AT&T’s HSPA network and will be limited to EDGE on the largest HSPA operator’s network. This will be too restrictive for the data-intensive Android platform and ultimately unattractive.

Therefore, T-Mobile’s support of the Nexus One could be a major fillip in the US. However, the opportunity afforded by exclusivity is tempered by the fact that Verizon Wireless, AT&T and Sprint constitute 78% of US connections. More importantly, T-Mobile’s rivals have the vast majority of the high-spending contract customers that the Nexus One targets. T-Mobile has the chance to churn customers from rivals, but those customers are likely to be locked into contracts and will view T-Mobile with a good degree of scepticism. The result will be further ‘baby steps’ for Google as it looks to penetrate its home market.

Previous article
Celcom Broadband Basic Youth Package
Next article
Maxis will suspend your Broadband service for hitting the limit
Kugan
Kugan is the co-founder of MalaysianWireless. He has been observing the mobile industry since 2003. Connect with him on Twitter: @scamboy