A morning without DiGi Data Service

Today, it was a morning without DiGi mobile Internet(EDGE & 3G) for me. The time was about 8am and I wasn’t able to receive any email on my Blackberry, surf using mobile Internet or use Twitter as I normally do. On top of that I needed to use Google Maps but the maps wasn’t loading although my GPS worked.

DiGi did not pick up my calls to the customer service(016-2211800) when the problem occurred. But later today a notice was posted on the DiGi website:

We are currently facing intermittent interruptions to our data services. Our engineers are investigating the issue now and working as fast as they can to restore services.

We truly apologise and regret the inconvenience caused. You can also follow us on Facebook for updates. Thank you.

It appears that the problem started with a “network interruption” in Melaka and Negeri Sembilan, according to DiGi via its official Twitter account- 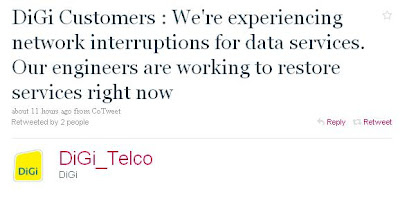 Followed by this tweet, probably indicating a nationwide issue– 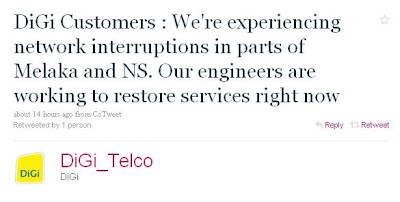 DiGi’s data network resumed back at about 10am.