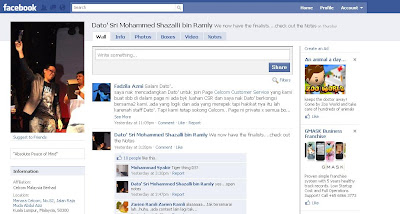 It is very rare to see Celcom being open. I’m not Celcom saying that they are not friendly to the public or to their customers, but what they they are doing is just not enough(for me).

I have been following the Facebook page of Celcom’s CEO for months now and I thought it will just be quiet as the man himself could be busy with his work just as any CEOs out there. And another reason is- Yes, especially when it is coming from Celcom.

But I was wrong.

Dato’ Sri Mohammed Shazalli bin Ramly, the CEO of Celcom is active on Facebook, at least a few times a week. On Feb 19 2010, he announced a contest that allowed his 1,7xx fans to win a Blackberry Bold and the response was amazing! Good work Dato’ Sri.

Now if only Celcom could learn something from their own CEO, they could do better to win their customer’s heart.

Previous article
Is P1 WiMAX Really 4G?
Next article
TM to launch HSBB on 24 March 2010
Kugan
Kugan is the co-founder of MalaysianWireless. He has been observing the mobile industry since 2003. Connect with him on Twitter: @scamboy