Due to be launched in March 2010, Telekom Malaysia has been quietly working on a social networking site called YEMMZ!(Pronounced: Yeem-zy).

The site is not completed yet and it is believed that is will focus more on something called “social trading” which allow users to trade products(buy/sell kind of stuff). 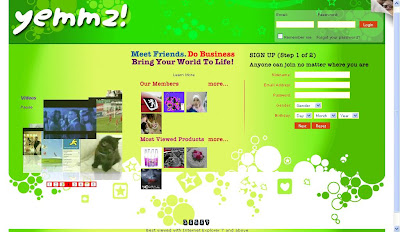 A check on the YEMMZ domain revealed that it was registered on 21 May 2009, the stats counter points out that so far over 15k people has visited the site. In comparison, Ruumz was launched in January 2009.

A Facebook fan page has been set-up over here, it has about 183 fans.

I have not tested YEMMZ! yet, if you have done so, please comment on this post. Registration is free.

Previous article
Maxis to open up network for content developers
Next article
Video: DiGi CEO revelead iPhone on Bloomberg
Kugan
Kugan is the co-founder of MalaysianWireless. He has been observing the mobile industry since 2003. Connect with him on Twitter: @scamboy